Roman Cancel (ロマンキャンセル, Roman Kyanseru?), shortened to RC, is a mechanic in the Guilty Gear series that allows a player to cancel the ending lag of their attack in order to extend combos, to apply pressure, or to make certain moves safe. They are signalled by a circle flash that comes for a split-second.

First appearing in Guilty Gear X, the player can cancel while hitting the opponent with an attack by pushing any three of the attack buttons (

). It will forcefully stop attack actions and return the character to a neutral standing stance, even in mid-air. A Roman Cancel consumes 50% of the Tension Gauge.

Roman Cancels are distinctively known by their unique effect of a pair of crossing light rings surrounding and emitting the character performing it. As of Guilty Gear XX ♯Reload, the graphics for the rings become more light-based and transparent, akin to the startup flashes of Overdrive Attacks. As a bonus, the announcer also yells out "ROMANTIC".

The Roman Cancel system in the Xrd games offers much more freedom compared to previous games, while also changing into a mere expanding circular aura in three colors: red, yellow, and purple. It allows cancelling almost any attack at almost any time, allowing players to easily create new blockstrings, combos, and mixups on the fly. It also decreases Tension gain by 80% for 6 seconds. During a Roman Cancel, the opponent's movement speed is briefly and approximately halved. In case an attack cannot be yellow or purple Roman Cancelled, a red X will appear over the character during the attempt.

The mechanic remains in Guilty Gear -Strive-, although with modifications. There are now four colors, all of which consume 50% of the gauge. On activation, a shockwave forms around the character, temporarily slowing down the opponent's movements if they are within its range. The slow down lasts until the clock above the character's head disappears. Its properties depend on the character's state when used.

With the exception of yellow cancels, these Roman Cancels can be performed right after a Dash in any direction, allowing characters to move quickly in the direction inputted (colloquially called a "RC Drift"), and can be cancelled by inputting an attack command right after the RC activation effects disappear (colloquialy called a "RC Fast Cancel"). When this happens, it won't produce the shockwave, but will cancel into special moves. Charge inputs do not need to be held to activate.

The following types are equipable abilities in Survival Mode in Λ Core Plus: 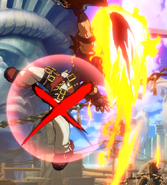