Psych Bursts (サイクバースト, Saiku Bāsuto?) are a gameplay mechanic introduced in Guilty Gear XX, and a system created to turn matches around in various situations and further permit the use of a wide range of strategies. By using Bursts, not only can the player knockback opponents, but also provide other benefits.

Several other similar games that may or may not also be developed by Arc System Works also have expanded on this mechanic since.

Whenever a player takes damage, the player will also gain some Burst. The formula that determines exactly how much Burst gained is:

In the Xrd games, the gauge's fill rate is unknown, but it is likely similar to how it works in XX. In any case, when the gauge is full, a Burst can be performed by pressing

). The resulting Burst type will depend on the character's current state.

Bursts themselves count as a projectile hit, meaning they have no physical pushback upon connecting. They also do not inflict any damage whatsoever. Upon connecting with a burst, it will knock the opponent down and away.

Gold Bursts are invulnerable to strikes, but at any point in the air during or after the character can be air thrown, even on startup with perfect timing.

A Burst will be blue when performed while in a defensive state: being hit, while blocking, while knocked down, etc. Its major drawback is that its recovery is completely vulnerable, meaning that if the opponent anticipates and blocks the Burst, they are free to punish the Burst miss as they fall. Blue Bursts can also be air thrown at any point—even on startup.

For a large amount of decision making for Blue Bursts, it often depends on the attacker to try and bait them, and the defender to try and catch the attacker in a committal action so that the burst can safely knock them away.

They will be disabled, signaled by a red X on the gauge, even with a full gauge while: Being thrown, getting hit by an Overdrive or Instant Kill (normally during startup flash; a Burst that happens to be triggered just before the startup of these kinds of attacks have occurred will still go through its animation); bear stunned (dizzied); getting hit by certain attacks, which tends to be a very specific case; and during round start or round end. 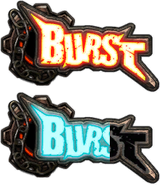 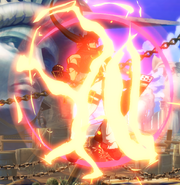 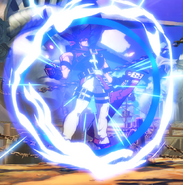