The May Ship is a recurring airship in the Guilty Gear series. it is carrier-class hover ship captained by Johnny and crewed by the Jellyfish Pirates, and has appeared as battle stage for both Johnny and May. It is succeeded by the May Ship II in the Xrd games.

The May Ship is nearly 250 metres long, 50 metres high, and 30 metres wide (not including wingspan). It has 112 cabins, only a fraction of which are lived-in by the current crew. It contains a large Galley and Mess, full bathroom and shower facilities, various weapon and equipment stores, as well as large compartments for cargo and vehicles. Over the years it has gone through various make-overs (most notably the color and grafitti), but can still be identified as being of Zepp-design in origin.[source needed]

The May Ship uses large turbine-propulsion systems on the wings and underside to hover and fly. These are powered by a small thermonuclear generator at the heart of the ship, and allow it to reach speeds averaging nearly 180 kilometres per hour. If it were ever destroyed, the resultant detonation would be catastrophic.[source needed]

In the original Guilty Gear stage, Battles take place in the Ship's wing, where a crew member can be seen waving by a window. Smaller blue and green whale ships can be seem flying behid.

Guilty Gear X features a new Mayship stage; with exposed mechanical parts, and a glass ceilling showing the interior of the ship. Graffitti reading 'L♡VE JOHNNY' and 'MAY SHIP' can be found. In XX, the stage is now set at night, and in Accent Core, it is docked at the sea, seemingly under repairs. Crew members in this itteration don't seem to follow any set design, and are mostly generic bikini and pirate girls. 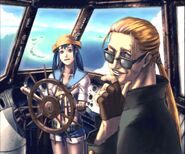 In Johnny's X Plus ending.