Junkyard Dog, also simply called Junkyard, is Sol Badguy's primary weapon in the Guilty Gear Xrd games, which combines two Sacred Treasures—the Fireseal and Flashing Fang. It can be used as blunt sword, and as a long-range cannon that can fire the Saint Oratorio spell.

In 2186, following the Baptisma 13 incident, Sol decides to prepare himself for the second coming of Valentine's forces,[1] Sol decides to upgrade his Fireseal sword, and designs the Junkyard Dog as a simple version of the Outrage[2] he himself created in 2073.[3] Unfortunately, it requires the Flashing Fang in order to fulfill that function.[2]

Sol, accompanied by Sin, thus embarks upon a journey to collect the Sacred Treasure and soon discovers that the Fang is being held under tight security inside a United Nations facility known as Harden Fort.[1] Around July, 2187,[4] Sol and Sin fight their way into the facility, where they run into Baldias. After a tremendous battle, Sol is able to defeat the Conclave member and take the Fang.[1] With both treasures in his possession, Sol hires a dog-human gunsmith, who was introduced to him by Dr. Paradigm, to build the Junkyard.[2]

Junkyard Dog can be used as a blunt weapon, or to fire projectiles. It is designed to be a simple version of the Outrage—a portable weapon that could fire the Saint Oratorio,[2] a very high-energy spell that is extremely dangerous to the user.[5]

By virtue of being composed of both the Fireseal and the Flashing Fang, it is able to concentrate and amplify fire magic,[6] and create and manipulate light magic.[7] It is a powerful weapon; at three-fold output, a blast of the Junkyard is able to "smash a mountain", according to Sol.[8] 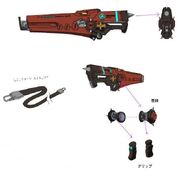