Janis is a supporting character in the Guilty Gear series, who is one of Johnny's crewmates. She is a black cat with a ribbon on her tail, sporting white hair and a red pirate hat.

Like the other Jellyfish Pirates members, she joins May in her in-game battle pose and her Instant Kill. She is also featured alongside May in her outro in Guilty Gear Xrd and -Strive-.

She is named after January, which is the month she was recruited into the pirate crew. 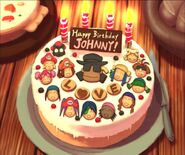 Face in a birthday cake decoration.