It has a cheaper "Append" version (アペンド版?) that requires the Λ Core disc upon start-up. The game has a balance patch to bring it up to the current arcade version, Λ Core Plus R.

Following the events of Guilty Gear XX, many a character enters into direct conflict with the Post-War Administration Bureau and the director of one of its branches, the amoral scientist Crow, who hopes to perfect his Imitation Series-version of Justice. 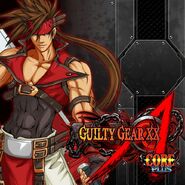