Guilty Gear X, subtitled [By Your Side "G. Gear"] in Japan, is the second entry in the Guilty Gear series. A sequel to the original Guilty Gear, the game was developed by Arc System Works. It was originally released for Sega's NAOMI arcade system, followed by a Dreamcast port in Japan. It would be released in North American and PAL regions on the PlayStation 2.

The character's sprites all were completely redrawn and subsequently used in recurring Guilty Gear releases to date, especially for its sequel and many revisions.

The game retains the majority of features from its predecessor, while adding and removing others. Movement commands are the same; the four basic attacks, but Taunt is now labelled as Respect

(Taunting is done while tapping the button neutral, while Respect is done with a sideways direction).

The Dust input done with

while standing (which is a launcher that hits overhead) is still done the same, while sweeps done with

while crouching also remain the same as well (which hits low). However, the Dust when it connects causes a unique background effect occur if the attacker chases after the victim while also having the camera follow them better than in the previous title.

However, dash attacks are removed, and brand new standing

command normals. The ability to charge to enhance special moves for one usage is no longer possible (save for Ky who has one of his charged specials in the form of a separate-standard special move).

The Guard Balance is introduced, which works akin to a guard gauge of sorts. Located below the health bar, this gauge increases when a character successfully guards against attacks and decreases when taking damage. When it is raised up to a certain level, any oncoming attack is unconditionally treated as a counter hit for the character with high guard balance. As an inverse however, the guard balance when nearly empty acts as a damage scaling-modifier which decreases the damage output of attacks landed on the victim the lower the guard balance is. Taking no form of damage and/or not blocking attacks for a while returns the gauge to normal, but when it is emptied, dropping a combo instead instantly reverts the victim's guard balance back to normal.

Faultless Defense (formerly Perfect Guard) is now performed by blocking plus any 2 attack buttons simultaneously and drains the Tension Gauge when held down (but comes with various perks such as negating chip damage and increasing pushback upon blocking attacks). Dead Angle Attacks are now done with

+ any 2 attack buttons and use up 50% Tension, acting as guard-cancel attacks with invincibility to get the attacker off of the defender, but have notable recovery lag.

An entirely new addition are Roman Cancels which enable a player to cancel their attack to return to neutral state, even with attacks that aren't cancel-able by most normal means for a variety of usages (such as doing combos or maintaining pressure/safety in neutral). They are done by pressing any three attack buttons simultaneously, consuming 50% of the Tension Gauge.

In addition to Arcade, Versus and Training Mode, home versions of Guilty Gear X include a Survival Mode. The player races to defeat one CPU opponent after another (including "Daredevil" intrusions) and racks up experience points; as level rises, opponents become stronger and the mode is cleared when the player's level reaches 100. When a stage is cleared, health is slightly restored. Recording Mode allows to record one round's worth of images played against the computer.

One other major change is the HUD now having some of its indicators occur on the side of the screen alongside the combo/beat counter (such as the Counter Hit text and/or Recovery/Tech text).

The context for Guilty Gear X is presented thusly in its game manual: In 2181, less than a year later after the incident with Justice, information about the discovery of a particular Gear rose to the public's attention. The report stated that the Gear was functioning properly, undamaged and with no abnormalities detected, and that no civilians were harmed by it, either intentionally or accidentally. There were attempts to destroy it, but all were unsuccessful due to its combat capabilities.

As most Gears should be dormant without Justice's leadership, these news stunned the public. People were terrified by the possible emergence of a second self-reliant Gear like Justice, exarcerbated by rumors of each nation having their own Gears for military use. Driven by an all-time high anti-Gear sentiment, humanity did not want to give up their peace after the hundred year-long Crusades. Soon, an announcement was made: "Whosoever brings about the demise of this dreadful Gear shall be rewarded with the lofty sum of 500,000 World Dollars!".

After the success of the first Guilty Gear, Sammy Studios commissioned an arcade sequel in February 1999.[1] Developed by Team Neo Blood again led by Daisuke Ishiwatari, the sequel was about two years in development.[2] It was unveiled at the Amusement Expo in February 2000,[3] and released for arcades on the Sega NAOMI system in July 2000. Although the developers initially indicated that Guilty Gear X would debut for the PlayStation 2,[4] it was first released for Dreamcast on December 2000.

The PS2 version was announced by Sammy in June 2001 for release that fall,[5] and released in North America on September 2001. Since it was released before the Japanese version, the North American edition did not have the additional features of the Japanese counterpart,[6] released in November 2001 as Guilty Gear X Plus. The update came in two versions: regular and deluxe, with the latter containing Guilty Gear-related special products.[7] On February 13, 2003, the game was re-released in Japan as part of PlayStation2 the Best. 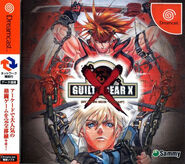