Baldias is an antagonist who appears in Guilty Gear Vastedge XT. He is the third member of the Conclave, an organization which has long controlled the world from the shadows. He keeps watch over Harden Fort, where the Flashing Fang is stored.

Baldias's stature is abnormally thin and stretched. Similar to the other three members of the Conclave, he covers his face and body entirely with a metallic mask, a trenchcoat, and a hat. His mask has the roman numeral III, showing his position in the organization, and extends all the way down to his neck.

Underneath the clothing, Baldias hides his machine-like body structure with unusual features, such as absence of certain facial features, an extremely long neck, and elongated fingers. His back has four appendages, which resemble beast heads.

Baldias, like the other members of the Conclave, appears aloof and frivolous. During his engagement with Sol, he constantly mocks and taunts his opponent with every attack, going as far as to call Sol "aged", showing his arrogance. Even so, after his defeat, he maintains his composure and does not reveal any of his, or the Conclave's, intentions.

Baldias alongside Chronus, Axus and Libraria was one of the Original's five Apostles who spread the arcane knowledge and influence of magic around the world in order to recover from the Dawn of Revival. Followingthe inception of the Sanctus Populi, the four Apostles formed the Conclave with Chronus as their leader, in order to act as advisers to the United Nations. In practice, their power became such that they came to control virtually every aspect of UN operations.

Encased in Harden Fort, Baldias took it upon himself to researching the art of resurrection, likely using Dr. Baldhead's knowledge to do so as well as the deceased Zato-1 as a test subject.

In 2187, Sol and Sin Kiske search for the Flashing Fang, one of the Sacred Treasures, in preparation for the second coming of Valentine's forces. They fight their way into Harden Fort, where Baldias appears before them. After a short exchange with Sol about the weapon, Baldias attempts to kill Sol with no avail. After his defeat, Baldias laughs revealing that the governments of the world are actually under the control of the Conclave, but then disappears into a puddle. Despite this, he passes away shortly thereafter, prompting the other members of the Conclave to remain resolute in their plan to save humanity.

Baldias makes a cameo as an apparition at the Opera House stage alongside Libraria and Axus, confirming his death at the hands of Sol.

Baldias fights by using a technology named Cerberus, which seems to be related to the Forbidden Beasts—specifically, to Eddie. In fact, during his fight with Sol, he uses Zato-1's moves, like Invite Hell and Great White; it is unknown, however, if it is a real Forbidden Beast or an imitation. Baldias is also strong enough to take Sol's Fafnir punch head-on, and was considered to be a major threat to the recovery of the Flashing Fang by Dr. Paradigm. 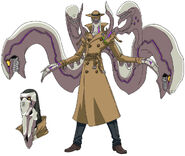 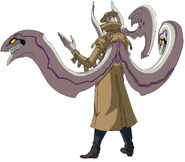 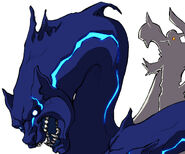