Axus is a member of the Conclave.

Similar to the other three members of the Conclave, he covers his face and body with a metallic mask, a trenchcoat, and a hat. His mask has the roman numeral 'I' on it.

Axus alongside Chronus, Libraria, Baldias and Ariels was one of the Original's five Apostles who spread the arcane knowledge and influence of magic around the world. While Ariels became the current Sanctus Maximus Populis, the other Apostles established the Conclave with Chronus as their leader and advisor of Sanctus Maximus Populis.

As Chronus proceeds to fuse his soul into Justice, after promising him and Libraria to meet them in the next life as he expected to not survive, Axus enters Illyria Castle during the Opus attack to eliminate any threat to their plans. He encounters Ky at the east gate and shoots him in the back as he was about to meet up with Leo Whitefang, explaining to have no personal grudge against the young king as he guns him down. Axus was about to leave when Ky revives through his newly gained power Crimson, killing the Apostle with Rising Force. 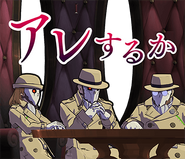 LINE sticker with Chronus and Libraria.