Ariels is a major character in the Guilty Gear series. Presenting herself as calm and virtuous, Ariels is the first and only woman to be Sanctus Maximus Populi, the leader of the Sanctus Populi, having succeeded Hapinus XXVII.

Ariels has a fair complexion, short platinum blond hair, and red eyes. She wears a white bodysuit with a shoulder-length golden cape, and massive and intricate hat with a eagle-like emblem and long locks of hair coming out of it.

Publicly, Ariels is known as calm and virtuous,[6] and always presents herself as a benevolent and understanding individual who cares for her people, and who desires nothing more than their security.[7] However, this is all a façade:[3] Her true persona is one of pure hatred for the human race, disregarding them all as nothing more than redundancies[8]—such that she cannot bring herself to lie about it.[7]

Disgusted by humanity's need for their "excess", hope,[8] and something of a show-off, Ariels enjoys tormenting them, expressing her hatred with child-like glee, occasionally breaking into fits of laughter,[3][8][9] and has no compunctions about being described as a demon, an embodiment of all that is evil to humans.[10] Describing herself as resilient, she is determined to accomplish her one and only goal no matter what.[11]

Ariels is not completely heartless however, caring for her daughters in her own twisted way:[5] Though she sees Ramlethal as defective, she believes that her death would spare her from a life of solitude and sadness;[5] and though she disregards Elphelt's wishes, she enjoys spending time with her[11] and wants for her to become a complete human,[3] thus achieving "everlasting happiness".[4] However, it appears that her "insanity" is a result of trapping Happy Chaos within herself.[12]

Created to find a path of eternal happiness for mankind, the Universal Will came to the conclusion that "true" humanity did not yet exist and began a quest to create its own version of humanity. To accomplish this, it sought to leave the Backyard multiple times,[4][13][14] only being able to do so by apparently merging with a human being.[15] As Ariels, she became acquainted with Sanctus Maximus Hapinus XXVII,[16] who appointed her as cardinal.[17] It is unknown what their relationship was, but Hapinus gradually grew weaker[16] and deranged.[17] In 2177, upon his death, Ariels was soon designated the new Sanctus Maximus.[16]

Unbeknownst to everyone, even the Conclave,[2] as part of her agenda, regarding the government-provided vaccines that slowed down the genetic changes of the Japanese, Ariels had them switched to a placebo at some point.[17] She also somehow met Bedman[18] and Delilah[19] through unknown means. Sometime in 2185,[20] she created Valentine in the Backyard[21] as a living copy of Aria Hale,[22] and programmed her to obtain the "key"[1] to That Man's Cube—prime field Gear cells.[23] However, Valentine is killed by Sol Badguy without accomplishing her 'errand' for Ariels.[22]

In 2186, following Baptisma 13, Ariels ordered the Opus to be developed.[24] She also personally entrusted the development of Collider Cannons to King Daryl,[25] but as they did not meet the output she wanted, the project was suspended.[26] She also created Ramlethal in June, but as she was a failure,[10] Ariels programmed her to seek out the Conclave and help them activate the Cradle.[27] Then, in December, she created Elphelt with emotions, to act as double agent during Justice's awakening,[2] and ultimately merge with Justice.[3]

In October 2181,[28] under the common goal of forming an Absolute World,[29] Ariels hires Bedman to act in her stead,[6][27][28] interrupting the flow of information that could result in the Conclave's plans being revealed to any opposing party.[18][30] On November 1, he refuses to dispose of Ramlethal, and Ariels placates Bedman by reminding him of their goal.[31] Everything goes just as planned,[32] until right after Justice's activation on November 5, Elphelt defies her programming and attempts to self-destruct. Ramlethal, however, convinces her not to do it, and Ariels is able to teleport Elphelt and Justice away to the Celestial Altar. Ariels then briefly takes her leave of Bedman to appear before the public to rally them against the incoming threat.[2]

Immediately after, Ariels places Elphelt in a dream so that she may sleep until the merge occurs, but she resists and wakes up on November 6, trapped within Justice.[33] In the following days, Ariels spends time with her, and explains that she never wanted Elphelt to be a "killing machine"; she wants her to become the first true human, finally showing her true colors.[3] Around November 10, Ariels agrees to Ky Kiske's request that the Opus be dismantled, and invites him the celebration of victory. He asks if she loves humanity, but she refrains from answering. After he leaves, she is informed by Bedman about the existence of Jack-O' Valentine.[7]

Days later, she returns to Elphelt's side; Ariels decides to cut her daughter's lingering attachments and sends a Phalanx[11] to kill Ramlethal at Scandiva. Apparently indifferent to her death,[10] around November 20, she receives Ky and Leo—who have learned that she is the Universal Will—at the celebration. Ariels explains that she programmed herself to loathe humans, and their hedonism, and begins the "party". Ariels summons her Gears, destroys the hall, and broadcasts an announcement: she reveals herself as the Universal Will to push the people to despair. She tries to kill Ky for managing to cut her, but Chipp Zanuff intervenes with the Zepp airship as back-up and she retreats.[8]

While her forces attack the capitol,[34] Ariels appears before Bedman after he had been mortally wounded by Venom and Robo-Ky. She thanks him for his services before revealing the truth of using the Absolute World to wipe out mankind. Furious, Bedman tries to erase Ariels, unnerving her, but he uses the last of his power to "atone" and dies. Ariels then teleports away[9] to Elphelt's side to await the Information Flare-powered merge.[26] However, thanks to everyone's efforts, a team comprised of Sol, Ky, Jack-O', and Sin Kiske manage to reach the altar. Sol, Ky and Sin engage Ariels in battle, while Jack-O' takes her place to replace Elphelt in the merge.[5]

Although Ariels has the advantage in the confrontation, Ramlethal and Raven's arrival, and the Saint Oratorio take Ariels by surprise, and Sol defeats her. Severly weakened by being hit by the spell, Ariels protects Sol and Jack-O' from Daryl's attempt to destroy them, explaining that they are her "hope". She passes out after asking Sol to take care of her daughters.[5] Immediately taken into custody, Ariels receives treatment from the Illyrian government under the strict watch of elite guards. Because of the dishonor she brought to her sacred title, her name is removed from the corresponding records.[6]

Three weeks later, while in custody, Ariels is visited by I-No, who has come to claim what is "hers"[12] in order to become complete. Ariels warns that "it" won't obey her just because and that she won't be able to get away with her plans for long. I-No proceeds to release Happy Chaos from within Ariels, leaving her a former shell of herself and weakened, and they immediately leave. Soon afterwars, Ky arrive to inspect the site,[12] but is unable to get any info out of her. Later on, when Ky shows Sol what happened, Ariels notices his presence and requests that he stop I-No before it is too late.[35]

In the epilogue, Ariels is seen recovering to her true self, smiling at two Illyrian soldiers. Although it is unknown if she will regain her position as the Sanctus Maximus.[source needed]

Given her century-long existence, Ariels wields unfathomable magical power and knowledge. While she is human,[4][6] she is incredibly tough physically, such that she can withstand the blast of a Saint Oratorio and survive,[5] though with grave injuries.[6] Her weapons of choice are a greatsword and Black Tech golden revolver.

She can conjure up offensive spells that are powerful enough to level an entire building,[8] has access to Absolute Defense: Felion,[36] can mask her—and others'—ID signal entirely even if her blood is used to track her down,[34] appears to know what certain individuals are doing at any given time (though the means she uses to do is a mystery),[18][26] and can teleport to any place that she wishes with no seeming limit to her range,[9] a feat that only Izuna appears able to match.

Ariels is also a very powerful and skilled swordswoman, effortlessly fending off and countering attacks from Sol, Ky and Sin at the same time. She can block devastating blows from Sol with one hand, and is able to repel magical blasts from his Junkyard Dog at three-fold output (which can obliterate a mountain) with ease. She seems to be absurdly strong as well, able to create a shockwave from swinging her sword, creating a large fissure in the Celestial Altar after Sol's blast cracked it.[5] 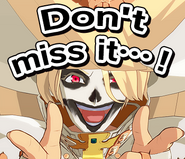