April is a supporting character in the Guilty Gear series, who is the best friend and adoptive sister of May, as well as the helmswoman of the Jellyfish Pirates, being in charge of the ship's navigation and acts like an older sister to May.

In the Guilty Gear X and XX series, April sports a sailor uniform with a blue bandana. In the Guilty Gear Xrd series, she receives a slight design update, as she no longer wears a bandana, but now sports a sailor cap with an anchor on it. She also no longer wears shorts as she now wears a blue skirt. In Strive, April now wears glasses and wears a pink backpack (identical to how May now wears a Chimaki backpack).

In Guilty Gear XX, she comforts Dizzy who has just calmed down after going berserk. She tells Dizzy, who has doubts about her origins, that she was sure that Gears can have parents. In Accent Core, she and Johnny become worried at May's disappearance and set off to find her. 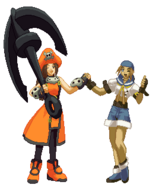 May and April victory pose.

Cheering May on during her intro in Guilty Gear Xrd

With the crew in Guilty Gear Xrd

With the crew in Guilty Gear Strive